I figure its only a matter of time until I just burn out on painting models, so i figure I'll try to get as many done as I can before the inevitable occurs. Mike and I also played a 30 stone game this weekend. Marcus vs Ramos. In the game Mike hit the table with an army fully painted by him. I think thats a first for him, so Kudos! But he got me inspired to paint up my Sabertooth Cerberus. I also knocked out the essence of Power too, but he was more of an after thought. 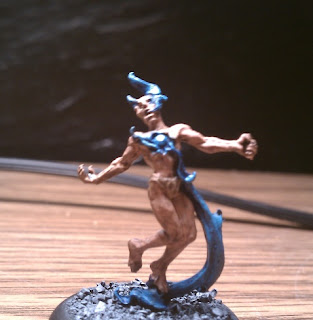 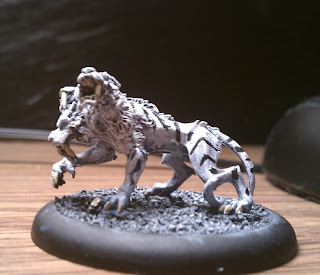 So yesterday Mike and I hit up the GPC for a Malifaux game. I set up all my terrain on the 3x3 board, giving us 5 buildings (just got a new church looking one) 2 forests, 2 lakes, walls, fences, up-turned wheelbarrows, bags of salt and sugar. really all kinds of crap. Mike flipped Slaughter and I got Assassinate. We also forgot to pick schemes, but that wasn't that important in the end. Mike won iniative and mentioned his box set is pretty fast, then he proved it. His rattler, waldegiests, Sabertooth, and Marcus made a be-line for my side of the board. I had barely made it out of my deployment zone when we engaged. Joss faced off with the rattler. Johan with the Sabertooth. He was also moving the woods closer to my crew with the Waldegiests, which was keeping Ramos in a bad spot. My spider swarms were trying to help the engagement, while Ramos stood back near my Brass spider to Stoke him. Things went my way early as I was drawing a lot of Tomes, which Ramos really needs to keep his crew in the fight. I was also keeping Joss healed and raising his armor as many times as I could. I took down his Rattler with Joss, then His sabertooth with Johan. He responded killing Joss with Marcus and Johan with a Waldegiest. My spider swarms really took over at this point dropping his Waldegiests with their insane number of attacks. Marcus ran over and engaged ramos and just started to whup his ass. Marcus as this great spell where he buffs himslef, and half the game mike shorted himself 1 effect from the buff. But at this point he realized his error and Marcus was usually +2def, +1 flip to combat, and +1 attack. Ramos was hanging on by a thread, and I only managed to live because ramos flipped a face card for damage prevention, with 1 life left. My spider swarms engaged Marcus and with the 12 of tomes in hand my Brass arachnid let the spider in base with Marcus re-activate. It was enough and the lord of beasts fell to a clittering hoarde of spiders.

I took a picture right as we engaged here it is. 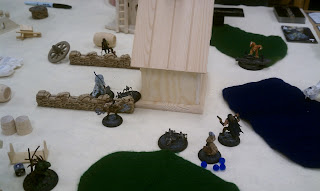 Those forests moved until they were each in base with Ramos. The one on the left moved so that it covered Joss, the Rattler, and my Spider swarm. The other waldegiest is beind the church, and my brass arachnid is out of the shot to the right.


The game had a lot of back and forth in it. I thought it was clearly over when i killed the rattler and cerberus. But his responses really evened up the game. I think the key here was I kept drawing tomes. In my first game with Ramos I didn't draw a single tome until turn 3. Also I was able to Stoke 4 times that game. Which requires an 11+ of tomes or the red joker, which is what I flipped 2 of those times. Ramos' key is his ability to reactivate, and the Brass Arachnid co-operated nicely.
Posted by Dan at 8:29 AM

Nice looking tiger - I like the paint scheme. How did you do the black lines like that? You'll have to show me - I wanted to do something like that with mine but couldn't figure out how to do it well.

Great game yesterday. I was reading over Marcus this morning and realized he can (0) to Companion a Beast. So I could have gone with Marcus first that turn, tried to take over Joss and failed (like I did) but still gotten to go with the Razerthorn first by Companioning him. Oh well - now I know. Looking forward to trying Marcus again. He was fun, and the Waldgeists were just brutal!