I took a bit off of my painting mostly out of laziness i guess, but with so few models left to paint I decided to try and crank them out. Mortimer the Grave Digger was recently given a nice boost, he is now allowed to cheat the Exhume flip. For those who aren't familiar with this, Mortimer has a spell that says if cast you flip the top card of your deck, if its a crow place a corpse token near Mortimer. It wasn't a flip your could cheat, so it was an ability that defined the model but only worked 25% of the time. Well Wyrd decided that wasn't cutting it and gave Morty the boost we rezzers have been hoping for since he was released. You may now drop a crow from your hand to pop out a corpse token, this will seriously buff Nicodem, but will also allow every master the chance to use Mort and not feel like your wasting 7 points. 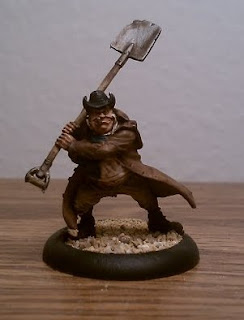