Back to the paints

Lately I seem to have been on a lazy kick. Well more specifically I had Dragon Age 2 and that was about 10x more fun than painting. Now I have mass effect which is about 8x more fun then painting. But I was still able to pull myself away from the game long enough to get Ryle painted up for my Levi Crew. Im pleased. He looks fantastic and I hit him with the blue I used for my Guild Crew in case I want to throw him in with Perdita (Not Likely he can't alpha strike) Check him out: 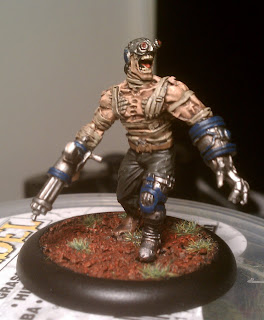 I had orginally tried to do a video with my new web-cam so I could show off a 360 rotation of him, but the resolution of my Web Cam is pretty poor so none of the detail work came through. Maybe one day i'll post up a video.
Posted by Dan at 8:51 AM