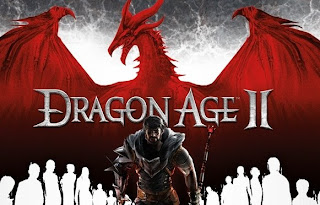 I will try and not put spoilers in here, but In case I do, consider this a warning.

So I finished Dragon Age 2 this past weekend and I gotta say it delivered on my expectations. Which were pretty high. It was fun, very different from Origins and Awakenings, and had a fantastic story to it.

The biggest change from Origins to 2 is the combat system. It is a more fluid system and is designed I think more for the Console gamer then the PC. I never played the PC version of Dragon Age, but I heard it pauses in combat so you can make your moves. The only thing I wish they had kept from Origins to 2 is the Auto attack button. In the final fight I was facing and enemy with a ton of HP and I was smashint my X button until my thumb was tired.

Also the graphics see a remarkable improvement. The characters look much more real, and the women much hotter and boobier.

The Supporting Characters in 2 are as good as the cast of Origins. There are less playable characters, but they are far superior to the crew of Awakenings. Even Anders, who was in awakenings, is better. The only beef with character interactions is that the game seems to want you to be gay. Now from what I hear the entire party except the Dwarf and your siblings will hook up with you regardless of Sex, but good god! I also remeber there was an Elf Guy in whore house who has a quest marker, ITS NOT A QUEST. its gay sex, luckily I was able to cancel the scene well before anything happened. Still it was disturbing.

Anyways, Im looking forward to giving it another go at some point. I am gonna play through Mass Effect 2 first. Then I will either get Home Front or play through DA2 again.
Posted by Dan at 8:04 AM