So Huzzah has this way of getting in products and then making me buy them. Its like hypnotism or something. Or maybe its just old fashioned gamer ADD. But who cares, Yesterday I went into the store with a few things in mind. First, my Battle Foam Pack MINI arrived after a month on order (yay) next I wanted the Small World Expansions. (got both) next up I wanted to buy the Something Wicked Expansion for Touch of Evil (didn't have it, its on order) and lastly I was pondering picking up a starter for Pulp City. I pondered for about 10 minutes and then remember I had already told chris to reserve me one so I got it. Lets look inside =) 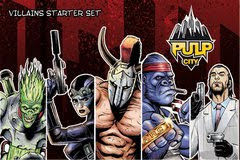 So first things I had to choose between the Villains and the Heroes. Those who know me well enough know that I subscribe to the lord helmet philosophy of the world. "Evil will triumph over good, because good is dumb!" Naturally I got Villains. Mike who agrees with this sentiment in all aspects except miniature games oddly enough grabbed the Hero box set. So my team of Villains consists of 5 dudes. 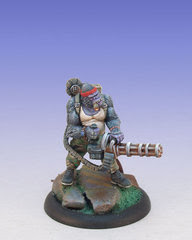 The Ape with a mini gun. In Pulp there is an entire subfaction of Ape men, who are fighting to overthrow the Humans and take over the world for ape kind. They are also all mercs who fight for either side. 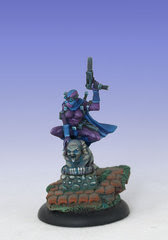 A ninja assassin kinda chick. She has a silenced uzi for a weapon. 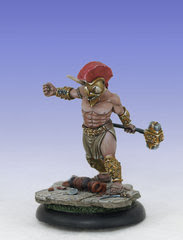 Hellsmith is fallen Greek god. He was second only to hephestus as the Forge god, In an attempt to rise in Power he sided against Olympus and was cast down. Now he trolls the streets of Pulp-City with a big ass hammer and a chip on his shoulder. 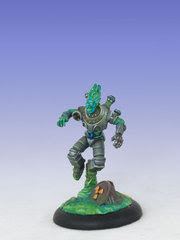 A horrible accident left Nuke a mutated mess. He is mute and psychotic. His powers are emense though, immune to all radiation he is a powerhouse capable of massive damage. 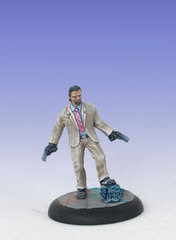 My personal favorite. The Gentlemen is a Villain, but works more for money and will work with the Heros for a price. He is a sophisticated hitman, and prides himself on his abilities and is capable of slaying even the most powerful foes. Plus he wears a suit when he kills people.


I have just finished assembling my dudes, and they are ready to cause some serious trouble on the streets of Pulp City.
Posted by Dan at 1:24 PM