This past weekend on 4-7 Internet Famous Bill of the Gamers Lounge and Dead Tau Project ran a tournament for the local scene. As a way of thanks only 4 people showed up, I declare the rest of you ungrateful.

The small group of players led to a different style of event. We each played each other and went VP grabbing. Who ever scored the most VPs after 3 games would win and so one down the line. 4th Place would be give the honor of the Spoon. Im still not sure what this entails, but there will be a big wooden spoon and name plates attached to it.

Due to a sexy combination of laziness and competativeness I played Kirai in all 3 games. 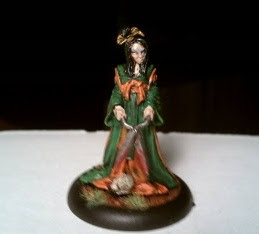 Game 1 vs Brian and Lady J
I ended up winning 8-0, but it was a lucky flip on damage that sent the game into that score. Until about half way through turn 6 it was 6-4 in my favor. And then I managaed to score a hit on Lady J, Brian had stones to stop the hit, but figured he could take it. On a -- flip the Red Joker came up along with another severe dropping Lady J and sending the game into a total beat down. Had I not killed her like that the final score would likely have been 6-4.

Game 2 vs Pierre and Colette
This game had a rough start as his crew was small but very Elite. I figured I had to wear him down and run through his soul stones to get anywhere. Around turn 3 I killed the Coryphee duet and that swung the entire game. I soon started turning his doves in Gaki with Datsue-ba and making forcing Colette to stay away from my crew. As the turns wore on I took a bigger advantage killing Cassandra and continuing to keep Colette at bay. I won the game 8-4

Game 3 vs Josh and the Vickis
My sole loss came on an unfortunate set of attacks. I needed Grudge on his Convict Gunslinger to force a draw, but Ikiryo's 4 attacks did not produce the damage required to kill him off and I was tabled. Despite my crew's demise I managed a nice 6 vps. Josh achieved a full 8.

When Final totals were calculated they looked like this

I got a cool Line of Sight Laser and some store credit for my victory. I have another tourney in a few weeks down at Victory Comics in Falls Church. My plan is to take the Vickis and Levi as a 1-2 punch.
Posted by Dan at 9:21 AM 1 comment: