So recently I've been playing Blood Bowl more then any other game. This has caused me to focus my hobby attention on actually getting a team painted for the first time.

Behold the Awesome Glory that is my Norse Team. 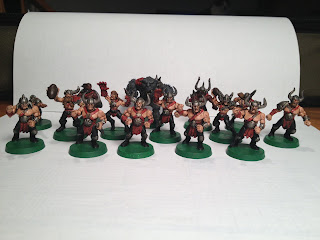 Meet The Drunken Reds, my norse team. This picture contains all 15 possible members of the team. Im hoping to get a game or 2 in with them this week to celebrate their newly paintedness. 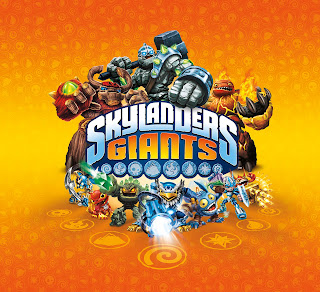 So the other big time sinc for my of late has been Skylanders Giants. I bought the first Skylanders about a year ago and since then its been a frenzy of awesome buying and spending a bunch of Money. The sequel brings about the Giants. A new brand of Skylander that is bigger, slower, and has more HPs. They can also do Giantey things. Like move Islands, topple towers, and punch down walls. To this point I am enjoying the heck out of Skylanders Giants. 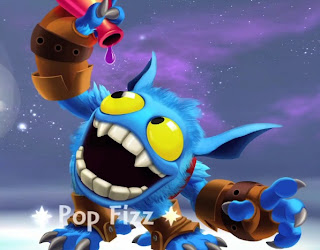 My favorite character is Popfizz. He is a regular Skylander not a giant. His abilities revolve around a series of potions. He has a basic one that just does a lot of damage. A second one that pops out little bottles with legs that walk around and shoot things, and Finally an acidey one that leaves a puddle on the ground that causes additional damage to enemies. He also has an ability to drink a potion that turns him into a Mr. Hyde version of himself. Much tougher and completely melee oriented, but that potion is on a Timer and will wear off after a while.

And Finally go see Wreck it Ralph. Awesome movie with great video game references and what not. The story is pretty fantastic
Posted by Dan at 8:00 AM No comments: