Got the Slate Ridge Mauler and Blessed of December painted up to help Marcus out. 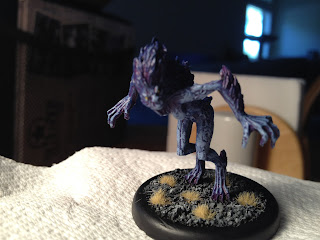 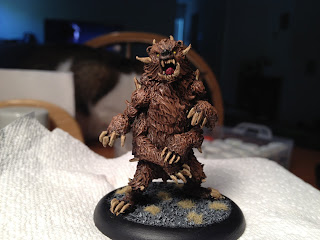 I'll clear this up now, Kyle was my RP character in a Scion campaign that we finished up last night. He easily makes it onto this list of my favorite RP characters.

Kyle was the Scion of Dionysis and was an iresponsible party boy. Of all the members of his Scion band it took him the longest to come to grips with what he was, The Child of a God, but once he accepted this truth he held on to firmly and fought for it with his life. Though he and his companions ended thier trials at odds with each other. When the time came to step up and save the world they all banded together. Kyle never expected to be elevated to the status of Godhood and never would have dreamed of trying to stand up to a being like Chronos 1 on 1, but he did for his friends, his Son, and the entire world. His divine life ended as abruplty as it started. He is survived by his Son who shares a small portion of his divine blood. Rest in Peace Kyle. I'll miss you.
Posted by Dan at 2:43 PM No comments: 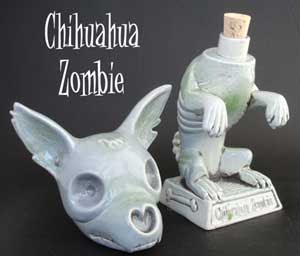 I wanted to share my tactics with the little guy since I think most people just view him as a cheaper Canine Remains.

First off He is a cheap corpse, but I would recomend not using him as such if you can help it. He has better things he can do.

Turn 1 cast wracked with pain. Most people know this one. It drops a dog to 1 wd left and grabs a body part. Its basically the same as McM doing it, but doesn't cost his AP.

After Turn 1. This is where the Zombie Chihuahua gets to have some fun. He has a spell that is just fantastic. magical extension. I know every totem gets it, he just does better stuff with it then most. Wracked with pain casts for him on a 9+ it does 2 wds outright, with a ridiculous range of like 12". Very nice spell to have. Plus you can boost it with stones if need be. And everytime he does it he grabs a body part counter.

But far and away his absolute best cast is Dissection. This is tricky, but can basically outright kill any Minion. First it has to be channeled, the Zombie Chihuahua only has a cast of 3, so its a tough bet that you will get a cheatable flip with out the channel. So to set this up leave him until your last activation for the turn and then run him up near his target. The following turn have him start things off. Burn a stone to put the resist out of reach (Cast 3, a double digit card, and a stone should hit any minion in the game.) Once you hit lay down the Severe and watch your foe die.

I often tell people when they ask how to counter McMourning that the Zombie Chihuahua should be an considered an equal threat to their crew as McMourning himself. And MUCH easier to kill off.

So thats pretty much it. Focus Dissection or cast Wracked with pain. My Zombie Chihuahua has wracked up some impressive kills over the games. Lillith, Executioner, and Von Schill, name a few. And some of them could even use stones.
Posted by Dan at 8:30 AM No comments:

Its been a while since I started Dust and I have yet to come up with a good way to review it. So I guess what Im gonna end up doing is just kind of stumbling through it, slop on some pictures, and then shove it on the blog. 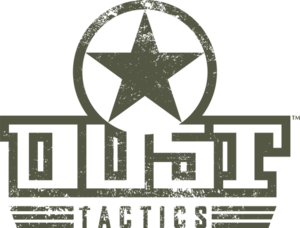 Starting the Pics off early

Dust Warfare uses the same models as Dust Tactics the Fantasy Flight Board Game. Also the Same Dice. From what I hear they are similar, but Warfare is more free formed and not played on a Grid like Tactics.

So Dust is a dystopian world based around WWII, which I like. The general back story is that the Gemans were about to lose the war when they found what might be, but totally is, Alien technology. They used to to Kill Hitler and have the regular military take over the country. Then they started to push back the Allies. The Gemans then asked for Peace, saying Hitler is dead and something worse is coming. The allies said hell to the no and then stole some Alien Tech and built their own awesomeness. So did the Russians. So now the world is divided into what I think is 3 major powers. Allies, Axis, and Russia, who got mad at the other allies for something. Also there is a rumor that Aliens who may not exist, but totally do, will be coming to town and become the 4th Faction. 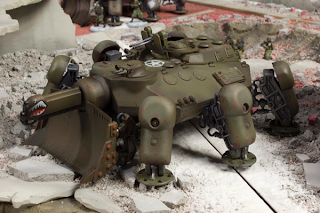 The game is pretty simple but has a lot of tables to keep track of. Each soldier has a gun. The gun has a range, basically from 6"-16" (Some are longer, but most cap at 16") Then there is a table that says when shotting said gun at a Soldier of X type roll Y Dice. So a Standard Army Ranger shooting his rifle at a standard German Grenadier would roll 1 die. The Dice are set up with 4 Blank Sides and 2 "Hit" Symbols so any single die has a 1/3 chance of scoring a hit.

There are 2 rules to the game that are really crucial. Cover is the first. Your soldiers can benefit from Hard or Soft Cover. Soft cover cancels a single hit against them from enemy fire. Hard Cover cancels two. So a Squad of Rifles (5 man on average) shooting into cover has a very poor chance of actually killing anyone. This leads to weapons that ignore cover. Grenade Launchers and Flame Throwers and the like. If a single weapon in your squad ignores cover, then all of them do. So special characters who can ignore cover with their shots are great choices to add into units so you can make normal weapons ignore cover. Most weapons that ignore cover have a smaller range so you have to up close to use them. 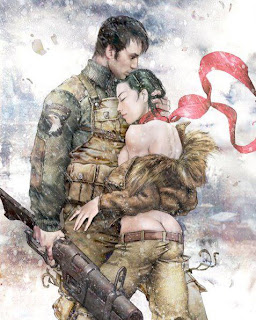 That Grenade Launcher in his hands is handy for kicking guys out of cover, the chick is kinda hot

The Second Rule is Supression. When a unit is hit by an enemy attack they suffer supression, whether you lose soldier sor not. At the start of a units activation they roll a die for each supression token. On a hit its removed. So building up a couple on a unit is a good way to keep them supressed. If a unit stays suppressed then they lose either their move or action for the turn. The game also uses a reaction system, where if a unit hasn't acted yet during the turn they can do something when an enemy is within 12" of them. Supression removes their ability to react. 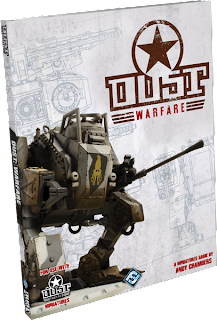 Check it, a Rule Book


So those are the most important rules to Dust. I guess now I will tell you why I like it. First off the world is really cool to me. I love the feel, the slightly advanced tech from WW2, plus the chance to field and force that is basically 100% Army Rangers is awesome to me. I like most of the rules. Some feel a touch tacked on, like the reaction system. But overall I think it still makes for a good game.

I dislike the Aliens. Thye don't exist yet, but I keep hearing that they are coming to be faction #4, and I do think these days Mini games need 4 factions to function right. But I dont really care for the idea of Aliens. Also I dislike how late it feels like the Russians army rules are. I don't play them, but several people at my LGS bought into them and have yet to get rules on how to play them. 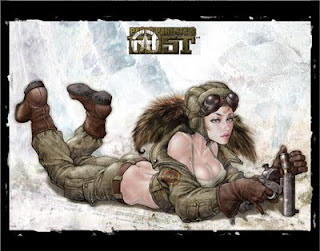 She wants to play too


Overal I would rate this game fairly well. Lets say a B+. Its my second favorite game at the moment behind Malifaux. But ahead of Hordes and any form of GW army game.
Posted by Dan at 7:53 AM 1 comment:

Moving into July means the year is half over (wow really?) and I decided to check back in on my New Years Resolutions and Overal Malifaux record for the year. Lets start with the resolutions. 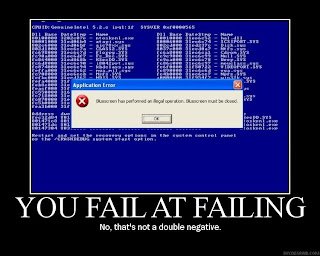 #1 Don't buy Minis for a game I do not already own.
FAILURE!!!! I bought into Dust Warefare. No regrets yet, its a fun as hell game. But I am off to a bad start.


#2 Dont buy any out of faction malifaux crews.
SUCCESS!!! For the moment anyways. the release of a 10 Thunders faction may draw me in. Gotta see what they are all about. Gen Con might be very Expensive.


#3 Read more
Im gonna call this a Success so far this year I have 15 books. Thats a big improvement over past years. But I'm gonna say if I don't read anymore by December then I failed to really follow through

#4 Get Into Grad School
Im not gonna get into specifics but, I decided not to apply.


OK MALIFAUX At the Half! (Be Warned I do love myself, and will pat me on the back a lot here) 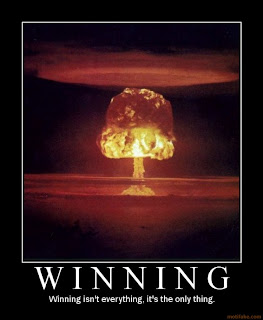 Also I am 1-0 with Molly (this surprises everyone)

Finally my eternal struggle to be better then Mike over at White Rabbit's Blog. I'm starting Small and just trying to go .500 in my games against him this year. To this point its not going great. I am 3/6/2. But I have 6 months left to bring that back up, I'm gonna need a win streak!

So there you have it, Im awesome at Malifaux, but only mediocre with Archanists.
Posted by Dan at 9:49 AM 3 comments: