With the year coming to an end I had 4 resolutions that I made for myself at the start of the year. Lets take a look

#1 Don't buy Minis for a game I do not already own
I failed this one thanks to the Cool Mini or Not kickstarter for Relic Knights. I'm ok with it, its was totally awesome.

#3 Read more
This was going very smoothly for about 3 months when I read like a dozen books. But since then I haven't read much of anything. Still its more then I read the past year.

#4 Get into Grad School
I actually assessed this decision over the past year and decided against it. So its a failure, but Im not upset by this.

I think I hate Wyrd

Strong statement sure, but I can back it up. Take a journey with me.

Wyrd is a very transparent company. It’s a nice chance of pace from Games Workshop who would prefer no one know anything about their products until a month after they release then to know something a day early. Wyrd is willing to talk to us, admit to mistakes, and clear up why things happen the way they do. That right there is a check in positives for Wyrd.

BUT one of the reasons Wyrd needs to be so transparent is that they are far too ambitious for their own good. Wyrd wants everything to rock all the time. And then when they get a new idea their like the 16 year old Cheerleader who just learned her best friend a whore. They have to tell EVERYONE! Maybe it’s not a great move to go around and tell everyone that Becky slept with half the basketball team. Maybe there will be consequences to this action. But screw that lets tell everyone that conservatively 75% of book 4 will be available at Gen Con... Whoops. Turns out Becky is pissed. (I'll stop crossing metaphor and reality now)

So Wyrd shows up to Gen Con, not with a BANG and all the impressive new plastics that they promised us. But instead with a couple choice picked box sets. BUT FEAR NOT CON GOER! We will have your Rail Crew in by Saturday! They told me this, to my face. Saturday come back and all with be right with the Wyrd world. Saturday came, and did I get a shiny new busty Asian dragon lady leaping off a bunch of broken rubble? Nope, I got a free shipping coupon. Gen Con = HUGE let down.

Now there are those in my group who said Wyrd's only fault was promising the Sun, Moon, Stars, Cupcakes, and big chested loose moral lasses to all, and only showing up with Cupcakes. I mean who doesn't like cupcakes. Why can't you be satisfied with your god damn cupcakes! It’s not a bad point. I can tell you why I wasn't satisfied. The Cupcake or in this case Rail Golem, was great. I was very happy to assemble the Rail Golem in my hotel room. But what I really wanted when I went to Gen Con was my Big Chested loose moral Lass. (The metaphors apparently won't be stopping) I mean how much better would that cupcake have been had I been able to smear the delicious frosting on the... never mind. I hope you get my point, let’s move on.

Ok so we are mad about Gen Con. But in the end it’s a forgivable offense. They botched a release, that’s ok they are a fairly new company. But there is something that’s been in the back of my mind for a while. And two things they've done in the past 2 weeks have really shoved it right in my face. Wyrd doesn't give a shit about Local Game Stores. They say they do, but actions speak far louder than words.

#1 Kick Starter. This began in the summer with Evil Baby orphanage which I had forgotten about until pretty much now. A chance for the people to back a successful company's chance to take a risk. This was odd to me but back then I was willing to lick up anything Wyrd shat out, so I dropped some cash on it and moved on. Now they are running the RPG kick starter. Which again I backed because I’m retarded.

I don't really care that Wyrd wants to use Kickstarter to crowd source money instead of risking their own capital. Good for them that they found investors. And it’s not like we aren't getting anything out of it. But again this is money that’s being taken away from my LGS and given straight to Wyrd. Am I to blame for this? Hell Yeah, but I’m a gamer and that makes me weak willed and flighty.

#2 is the Wyrd birthday sale. Again No chance for retailers to get in on this. If you want to Play Yan Lo (which I do really freakin badly) before god damn February, you need to buy him straight from us. Suck it LGS’ we say we love you, but don't give a crap about.

I’m running out of steam and awesome metaphors, better wrap this up.

So am I a hypocrite? Yes. Did I buy Yan Lo direct from Wyrd? Absolutely, I’m not waiting until god damn February. Am I still angry with them? Maybe, this rant has helped. I think at the end of the day, I don't hate Wyrd. I hate that I love Wyrd.
Posted by Dan at 1:28 PM 5 comments: 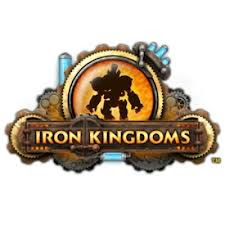 So last friday night I ran a 1 shot IK campaign for my RPG group. The main goal was to make sure we all had some type of grasp on the rules. The main plot centered around a Crime Lord who had escaped from Jail. Lael placed a large bounty on his head and the players went off to find where he was.

I pregenerated the Character so we could focus on playing. I'll dive into creation for a bit.

I am tempted to say this game has one of the easiest character creation processes I've seen in a role playing game. The Sheets can look a little daunting, but I think its actually a bit misleading. You start by picking a race. The Races are all pre-stated out so you just copy in the stats. Then you get 3 points with which to raise those stats. Then you pick 2 Careers. (The rulebook says pick your archtype first, but certain careers require archtypes so I would choose them first) The 2 careers come with preset Skills and Abilities, no math, just writing. From there you guy some gear and have to make a couple decisions. Its a very easy process, but ends up with a very detailed character. I like it a lot.

So the Party I put together looked like this.

A Skilled Human Pirate/Theif - This character was a bit roguey. Being our first game we missed several of her damage and attack bonus' but she still kicked a lot of butt.

An Intellectual Human Stormblade/Knight - He was a super tank, put out amazing damage, and got a lot of attacks. Likely the strongest PC in the party.

A Gifted Human Arcane Mechanic/Field Mechanic - He ran the steamjack and was able to dish out a few spells here and there. The Jack is actually pretty strong in this game, even the cheapo labor jacks.

A Gifted Human Duelist/Warcaster - The Duelist side didn't really come through for this character. But the Warcaster was pretty cool she could buff the entire party's armor and made them VERY tough. 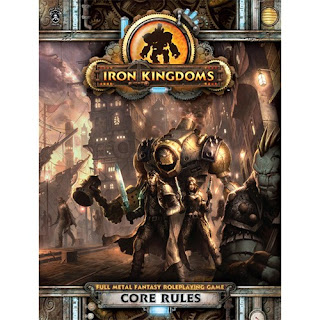 Again, the main point of the game was to learn the rules. So the character got into some fights and used their skills here and there to track down the bad guy. IK calls to use Mini's and Tape Measurers for Combat. I'll be honest Im not a fan of the Tape Measurer idea. So we pulled out a D&D grid which has 1x1 squares all over it. So instead of inches we measured in squares. I like to think it worked well, but we are going to try the real deal next time with the Tapes.

The fighting went smoothly, but I have one problem with it and since I ran 1 game I am clearly an expert on the subject. Balance is a bit of a razors edge. In the 2nd Fight I nearly killed the Stormblade in the first round of Combat. I was shocked since he hadn't really been damaged to that point. But quickly the players took over and carried the fight with no problem. The game is BRUTAL, like L5R brutal in combat. There are more ways to mitigate damage in IK, but its still a very deadly system. I think its going to be tough for GM's to figure out how to balance fights properly in the system.
Posted by Dan at 8:29 AM 1 comment: