My second first game of Malifaux.

Last night Mike and I got in our first official game of Malifaux 2nd Edition. We have played plenty of games before, but this time we had actual cards and a real rulebook. Lets just get to it. 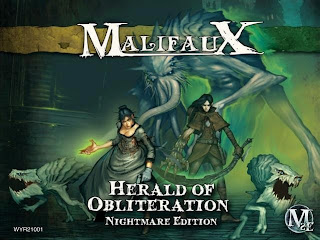 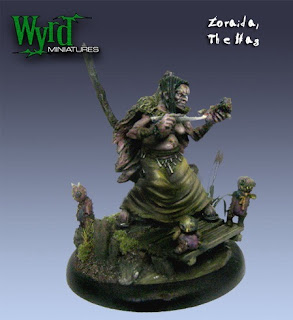 Turn 1:
Tara kicked things off nice and easy walking up the board, but letting herself reactivate. Zorida's Tots run up the edges of the board, away from all the hateful conflict. A Death Marshal activated and Boxed up the Nothing beast, then strode forward. Most of the the rest of our crews simply moved into place, until Zorida got a Slurid moving quick. He ran up into Tara and slashed at her a bit. Tara finally got the chance to use her reactivate and popped up the Nothing Beast. He then took the Slurid down.
Turn 2:

This began a nice string of Mike flipping 12's and 13's for Init. Zorida got Juju up into the Nothing beasts face and had him take a smack at the poor little guy. Tara went next and dropped out fast. She had to give it to Juju, but also got it on a Death Marshal, Void Wretch, and the Nothing Beast. Tara then proved she has the power to take as well as give, and removed Fast from Juju by making him slow. Juju went and put a hurting on the Nothing beast with Flurry. Nothing beast went and returned the favor smacking Bad Juju around. Both the big guys were at low health. Mike then made a bold and likely game saving move. He had the Doppleganger move around the Nothing beast, Copy Pine Box, and Burried Tara. This kept Tara from Reactivating, and me bury/popping the Nothing beast out for more play. Not pleased with this both of my fast models charged into her. Alas the Death Marshal who had her marked for death cheating in a 13 of rams to hit her got a black joker flip for damage leaving her barely alive.

Turn 3:
Again with a nice init flip he took the reigns and had Bad Juju end the Nothing Beast. I responded agressively and had my Marshal stab the Doppleganger down, and then shoot Juju square in the face. Barbaros made his presence known and started beating on my other Void Wretch. Zorida, took offense to losing her big lug and placed a vodoo doll on the offending marshall and then killed him. Tara and a Wretch both moved up to Zorida, but didnt do anything to her. Both Tots dropped some Scheme Markers, bringing him up to 4 on the center line. Karina took a nice shot at a Terror tot dropping him to 2. And the Last Marshal got a lucky Crit shot off to kill the other Tot. At this point our game was tied 2-2 each of us grabbing 2 points for Turf War.
Turn 4:
Dropping down from his usual 13, Mike flipped a 12 for Init and Had a Barbaros Kill Karina and drop a void wretch to 1 wound. The other Wretch delivered a message to Zorida for 2 points. I didnt realize that not announcing it lost me a point... grumble. We traded blows in the middle of the board, and when it was all said and done, Barbaros was staring down a single marshal, and Tara and Zorida were locked in Combat. No points for Turf war were awarded. 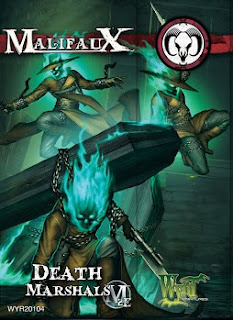 Turn 5:
Likely the last turn of the game. Tara kicked things off By running the heck away. She made it safely into Zoridas Deployment zone, and chilled. Barbaros did the same running into my Deployment zone. My last Marshal went and took out a Scheme marker, and zorida mostly just sat there staring into space. I flipped and the game Ended.
Final score:
Dan - Turf War 2, Entourage 2, Deliver a Message 2
Mike - Turf War 2, Line in the Sand 1, Entourage 3
So we ended up with a 6-6 Tie. Mike played very smart, but Tara was something he had never seen before so I was able to throw him off his game for bit. If not for a pair of ill timed Black Jokers, and not realizing I should announce my Schemes, I might have changed this from a tie to a win. Regardless it was a damn fun game.

A fantastic game for our second first game of Malifaux. I had a great time facing Tara, and you're absolutely right that she threw me off my game. I haven't felt that flat-footed facing a master in a long time. It was a fun experience. I had to rely on my old stand-by: grab VPs. If not for your non-announcing schemes (read them to see if you're losing out on points next time!), you would've won. I'll get you next time, gadget!

Oh, and the Doppleganger move was easily the highlight of my game. I know I talked ill of her in the past, but she really saved me that game, essentially removing two full activations from Tara that game, and stopped the Nothing Beast from getting another activation. Way to go, girl!